Eingetragen 2 Wochen vor von ava
19 Aufrufe
Bushfires are nothing new in Australia, but this season’s blazes have taken on a new dimension. Their vast scale is largely down to extreme weather conditions. Last year was the hottest and driest since recordings began in 1910.
More than 12 million hectares of land have been razed since the outbreak of the Australian bushfires in October 2019. As well as the human and financial costs, the fires have killed an estimated one billion wild animals.
One reason for the scale of the blazes is severe drought. Sheep farmer Brendan Cullen, who lives 60 km from the outback town of Broken Hill in southern Australia, says he has stopped looking at the weather report because it fills him with fear.
Even areas close to the coast have been hard hit by bush fires. The problems have unleashed fresh debate about climate change in Australia. Opposition to the country’s giant coal mining industry is growing. This documentary shows a land in turmoil.
--------------------------------------------------------------------
DW Documentary gives you knowledge beyond the headlines. Watch high-class documentaries from German broadcasters and international production companies. Meet intriguing people, travel to distant lands, get a look behind the complexities of daily life and build a deeper understanding of current affairs and global events. Subscribe and explore the world around you with DW Documentary.
Subscribe to:
DW Documentary: #
DW Documental (Spanish):
DW Documentary وثائقية دي دبليو: (Arabic):
For more visit:
Instagram:
Facebook:
DW netiquette policy: 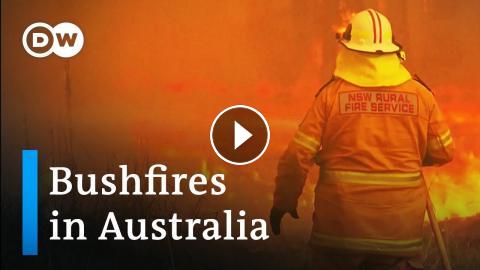 Bushfires are nothing new in Australia, but this season’s blazes have taken on a new dimension. Their vast scale is largely down to extreme weather co...