ava
This is a handsome example of the fox squirrel, the largest tree squirrel. It is 10-15 inches in length not including the tail. It has three distinct color patterns. In the northeastern part of its range, it is gray above with yellowish or orangish undersides. In the western part of its range as here, it is gray above and rust colored on its undersides. In the southern part of its range, it is black and brown with a white stripe on its face and a white tip on its tail. The fox squirrel is also known as the eastern fox squirrel. This fox squirrel was filmed in a cottonwood stand in the North Dakota Badlands at the westernmost limit of its natural distribution. They have been introduced to some cities of the far west and like all squirrels can thrive in a suburban environment.

Fox squirrels are strictly diurnal and spend more of their time on the ground than most other tree squirrels. They are still, however, agile climbers. They are impressive jumpers, easily spanning fifteen feet in horizontal leaps and free-falling twenty feet or more to a soft landing on a limb or trunk.

They are not particularly gregarious or playful, in fact they have been described as solitary and asocial creatures, coming together only in breeding season.

At a distance they can be mistaken for gray squirrels but upon closer inspection are significantly larger, bulkier with more musculature on their legs and as can be seen here have extended toes on their rear paws. This fox squirrel has an exceptionally long and beautiful orangish brown tail.

Filmed with Canon SX70HS on Amazon at: https://amzn.to/2QftDPd
Commision Earned
???? New HD videos uploaded weekly. If you enjoy the videos please subscribe, ring the bell to get all channel upload notifications, like, and comment! 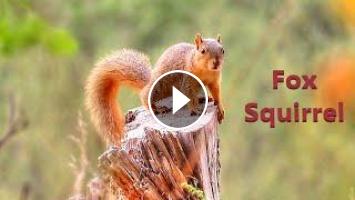 This is a handsome example of the fox squirrel, the largest tree squirrel. It is 10-15 inches in length not including the tail. It has three distinct ...