admin
Maria Callas Live: Re-mastered Live Recordings1949-64.
Film by Loïc Suchet, lagrangeagrunge.com
Although Maria Callas was just 53 when she died – 40 years ago on 16 September 1977 – she changed the face of opera for generations to come. Her legend has never faded: she remains the supreme singing-actress, the unsurpassed diva, and the glamorous style icon whose private life was often as dramatic as one of the tragic heroines she portrayed on stage. Commemorating the 40th anniversary of her death in Paris, Warner Classics presents the Maria Callas Live Remastered Edition: a deluxe 42-CD box set (also available as a digital download and on streaming platforms) drawing together the great soprano’s live opera and recital recordings, with the invaluable inclusion of 12 roles she never recorded in the studio. These 20 complete operas and five filmed recitals on Blu-ray have been newly remastered from the highest quality source material, with the cutting-edge technology of Studio Art et Son in Annecy, France. Maria Callas Live captures in sumptuous sound the very heart of Callas’ artistry: it is on the stages of the world’s great opera houses and concert halls that the Maria Callas legend came to life. Thanks to faithful remastering, listeners can hear these performances in greater clarity than ever before, with many of the recordings restored to achieve unprecedented immediacy and authenticity. In the best preserved cases, the voice is heard in all its splendor and dramatic potency as if truly seeing La Divina perform live. 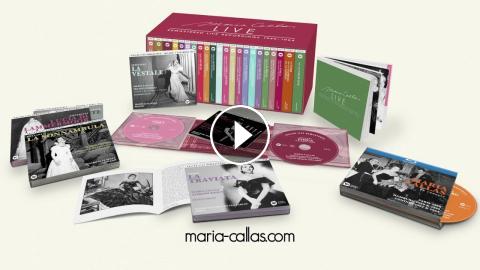