Thanks again to ARM & HAMMER™ Baking Soda for sponsoring this video!

If you take ARM & HAMMER Baking Soda and shaving cream and mix them together you get this super cool material that looks and feels like snow. It’s the perfect science experiment to do at home because you only need two ingredients. You can even make little snowmen with this mixture! The more shaving cream you add, the more fluffy the mixture gets, and the more Baking Soda you have, the more crumbly it is. Now, because we’re in Los Angeles, (and It’s 72 and sunny always) and it doesn’t snow here... I was curious..would it be possible to make enough of this fake snow to make a giant sledding hill? Now one theory on why real snow is slippery (which allows you to do snow sports) is because there are actually loose water molecules on the outside of ice which then acts like marbles on a kitchen floor. But because we’re not working with actual snow we needed to figure out how we could actually get the fake snow slippery enough to slide on! The first step was creating a small slope or “bunny hill” so that we have something to put the fake snow on. After some more testing we found out that to create the most slippery fake snow, you need many layers of fake snow with the top layer having the largest ratio of shaving cream to ARM & HAMMER Baking Soda. This in turn creates the least amount of friction.

Also because we love the environment just like everyone else we scooped all of the fake snow mix from both hills (bunny hill and giant version) and stored it for another experiment. We’ve also recycled the plastic sheets, carpets and kept the pool for another hot day.


Let me know in the comment section below if you’ve ever seen this fake snow or what else we could do with it. IF you haven't yet, hit that subscribe button 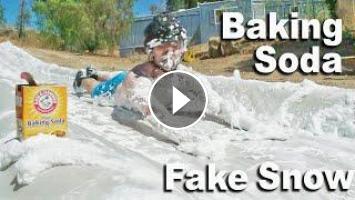