admin
Professor Stephen Hawking thinks the human species will have to populate a new planet within 100 years if it is to survive. This video is to promote the program Expedition New Earth, part of the Being Human season on BBC Earth. Subscribe to Earth Lab for more fascinating science videos -
*Stephen Hawking: We Must Leave Earth To Survive - Expedition New Earth*
With climate change, pollution, deforestation, pandemics and population growth, our own planet is becoming increasingly precarious. Professor Stephen Hawking explains his thoughts about the future of our species.
Expedition New Earth will be on TV in:
Asia: Starts Monday 4 December at 10.30pm
South Africa: Starts Sunday 10 December at 16:00 on DStv channel 184
All the best Earth Lab videos
Best of BBC Earth videos
The Doctors Are In The House
Best Of Earth Unplugged Videos
Check out the other two channels in the BBC Earth network:
BBC Earth:
BBC Earth Unplugged:
About BBC Earth Lab:
Welcome to BBC Earth Lab! Always wanted to know What the world’s strongest material is? Why trains can’t go uphill? Or How big our solar system really is? Well you’ve come to the right place. Here at BBC Earth Lab we answer all your curious questions about science in the world around you (and further afield too). As well as our Earth Lab originals we'll also bring you the best science and educational clips from the BBC science documentary archive including Forces of Nature with Brian Cox, James May's Things You Need To Know and plenty to keep the Docs away with Trust Me I’m A Doctor. And if there’s a question you have that we haven’t yet answered or an experiment you’d like us to try let us know in the comments on any of our videos and it could be answered by one of our Earth Lab experts. So whether you’re studying or just love to learn, BBC Earth Lab is your go to science channel – subcribe to never miss a video:
You can also find the BBC Earth community on Facebook, Twitter and Instagram. Want to share your views with the team behind BBC Earth and win prizes? Join our fan panel here: -...
This is a channel from BBC Worldwide who help fund new BBC programmes. 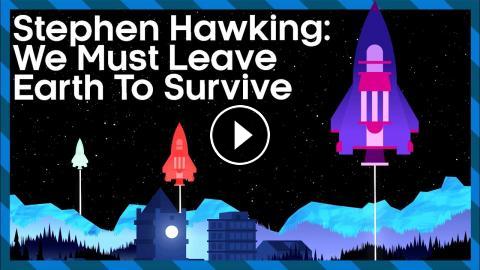 Professor Stephen Hawking thinks the human species will have to populate a new planet within 100 years if it is to survive. This video is to promote t...