ava
Weapons manufactured in the West and exported to Saudi Arabia and the United Arab Emirates have ended up in the hands of Yemeni militia.
This is directly in contravention of international law and arms trade treaties. A documentary by the independent journalist network Arab Reporters for Investigative Journalism (ARIJ) reveals the shocking details. Egyptian journalist Mohamed Aboelgheit spent a year tracing and documenting the origin of weapons that have ended up in the hands of armed groups fighting in Yemen’s civil war. The countries of origin include Germany, the US, the UK, Austria, Spain, Switzerland, Belgium, Serbia, Bulgaria and others. Yet according to international treaties, these arms should never have reached Yemeni militia groups. Aboelgheit created social media accounts using false Yemeni names to get access to the informal trading networks and groups. In some cases the sellers were at pains to emphasize that the weapons were brand new and had never been fired. The documentary airs weighty evidence to show that Gulf states have been passing arms sold to their military on to other parties in Yemen - for political reasons. This is clearly in breach of "end user” certification laws intended to ensure that exported arms are not passed on to third parties.
_______
DW Documentary gives you knowledge beyond the headlines. Watch high-class documentaries from German broadcasters and international production companies. Meet intriguing people, travel to distant lands, get a look behind the complexities of daily life and build a deeper understanding of current affairs and global events. Subscribe and explore the world around you with DW Documentary.
Subscribe to DW Documentary:
#
For more documentaries visit:
Instagram
Facebook:
DW netiquette policy: 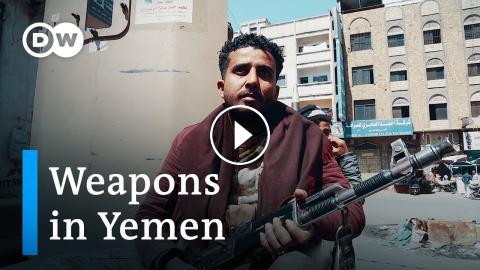 Weapons manufactured in the West and exported to Saudi Arabia and the United Arab Emirates have ended up in the hands of Yemeni militia.This is direct...