ava
A bachelor flock of male Bighorn Sheep (rams) relax on a high vantage point in the Badlands National Park of South Dakota in early September. Soon some of them will face off in their trademark battles to determine breeding right. As we see in this film, Bighorn sheep groups protect themselves from predators by facing different directions allowing them to keep watch on their surroundings.
It is during the mating season or "rut” that the rams join the female groups and engage in fierce competition to establish access rights to ewes. Their dominance hierarchy is based on age and size (including horn size), which usually prevents rams younger than seven years old from mating. Younger males will mate sooner if dominant rams in their group are killed.

Mating competition involves two rams running toward one another at speeds around 40 miles (64 kilometers) an hour and clashing their curled horns, which produces a sound that can be heard a mile away. Most of the characteristic horn-clashing between rams occurs during the pre-rut period, although this behavior may occur to a limited extent throughout the year.

Mature males spend most of their year in bachelor flocks apart from groups of females and young sheep. Young females generally remain in their mother's group (led by an older ewe) for life. All ewes are subordinate to even young rams with bigger horns.

Males depart their mother's group around two to four years of age and join a group of rams. This is sometimes a tough time of wandering until the young rams find a male group, and they will sometimes take up with other species out of loneliness.
https://www.nwf.org/Home/Educational-Resources/Wildlife-Guide/Mammals/Bighorn-Sheep
Filmed with Canon SX70HS on Amazon at: https://amzn.to/2QftDPd
Commision Earned
???? New HD videos uploaded weekly. If you enjoy the videos please subscribe, ring the bell to get all channel upload notifications, like, and comment! 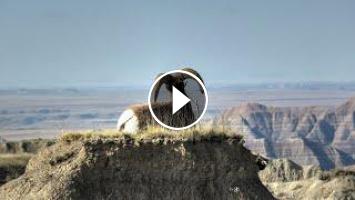