Germany's role in NATO and the world | DW Documentary

ava
The world has become more insecure and a new arms race seems imminent. Disarmament treaties are lapsing and existing alliances crumbling. Will Germany be able to meet the challenges?
"We have systems in the German Armed Forces that are older than I am," says 45-year-old Peter Tauber (CDU), an undersecretary in the German Defense Ministry. At the same time, NATO Secretary General Jens Stoltenberg has made it crystal clear: "We expect the Bundeswehr to invest more in defense.” What’s the current state of the Bundeswehr and how is it adapting to the new global challenges? What does NATO expect from Germany and how can the two sides reconcile their national and international strategies?
The USA accuses the Germans of recklessly jeopardizing the alliance’s future. At three successive summits since 2014, the German government promised to bring its defense spending closer into line with the two percent of gross domestic product laid down in the NATO Treaty, but it now expects it to be around 1.35 percent of GDP in 2019. "Germany's refusal to honor its pledge will have long-term consequences for NATO capabilities and solidarity,” warns Julianne Smith, a former security advisor to Obama's Vice President Joe Biden, adding that it wouldn’t be impossible for the US under Donald Trump to even leave NATO.” The filmmakers accompany NATO’s Very High Readiness Joint Task Force and observe German, Dutch and Norwegian troops on exercise in Poland. Nobody actually mentions Russia by name, but everyone here knows what they're training for. Russia has upgraded the defense capabilities of its Kaliningrad enclave with Iskander missiles that can be fitted with nuclear warheads. Yet just a few kilometers away, the German Army is training Lithuanian units on how to defend the Baltic state against an invasion from the East.
--------------------------------------------------------------------
DW Documentary gives you knowledge beyond the headlines. Watch high-class documentaries from German broadcasters and international production companies. Meet intriguing people, travel to distant lands, get a look behind the complexities of daily life and build a deeper understanding of current affairs and global events. Subscribe and explore the world around you with DW Documentary.
Subscribe to:
DW Documentary: #
DW Documental (Spanish):
DW Documentary وثائقية دي دبليو: (Arabic):
For more visit:
Instagram:
Facebook:
DW netiquette policy:

Germany's role in NATO and the world | DW Documentary 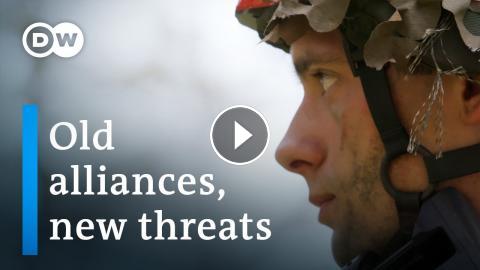 The world has become more insecure and a new arms race seems imminent. Disarmament treaties are lapsing and existing alliances crumbling. Will Germany...