ava
A warbler that few people have heard of and is not from Tennessee - a new to the channel bird.
First time getting a migrating Tennessee Warbler on video as it feasts on nectar of the Devil's Walking Stick berries in the Great Smoky Mountains. If you watch closely you'll see it piercing the small berries and eating the nectar inside. This cluster of trees with ripe fruit in early October is a migrating bird magnet.
The Tennessee Warbler has never bred in Tennessee. The name comes from the specimen that Alexander Wilson collected on the banks of the Cumberland River while the bird was on migration in 1811.
The breeding range of this is species is almost entirely in the boreal forest of Canada. This dainty songbird has a robust voice and often signals the peak of spring migration in Tennessee. It is a common migrant across the state and is present from mid-April to mid-May and then again from late August to late October. The Tennessee Warbler spends the winter in Central and northern South America.
This small drab songbird has a short sharp bill, a thin white line over the eye, an olive-green back, and is white below with a gray wash to the sides. It has no wing-bars, tail-spots, or eye-ring. The male and female are similar in plumage, but juvenile birds are overall more yellow.
The song is a series of several loud, sharp, chips, usually in a pattern of two or three sets.
During migration across much of the eastern two thirds of the US it is found in woodland, forest edge, and shrubby areas.
Diet consists of Insects, caterpillars, fruit, and nectar.

The Tennessee Warbler is a specialist on the spruce budworm so the numbers of Tennessee Warblers fluctuate in response to periodic outbreaks of the budworm in Canadian forests. During budworm epidemics, the breeding density for this warbler may exceed 50 territories every 25 acres!

The first nest of the Tennessee Warbler was not discovered until 1901. Due to the remote area where this bird breeds and the difficulty in finding nests, many aspects of its breeding behavior are still unknown.
The Tennessee Warbler often over-winters in coffee plantations in Latin America. It's been suggested that a more appropriate name might be "Coffee Warbler."

https://www.tn.gov/twra/wildlife/birds/forest-birds/tennessee-warbler.html
Filmed with Canon SX70HS on Amazon at: https://amzn.to/2QftDPd
Commission Earned
???? New HD videos uploaded weekly. If you enjoy the videos please subscribe, ring the bell to get all channel upload notifications, like, and comment! 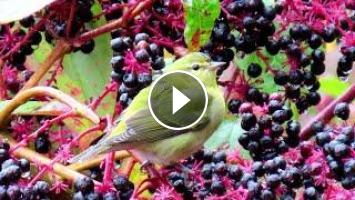 A warbler that few people have heard of and is not from Tennessee - a new to the channel bird. First time getting a migrating Tennessee Warbler on vid...