ava
An extensive modern art collection, including works by Warhol, Pollock and Kandinsky, was put together by Iranian ex-Empress Farah Diba in Tehran, Iran.
For the moment, at least, this documentary may be the only way to view the legendary art collection in the depths of the Tehran Museum of Contemporary Art (TMoCA). Some forty years ago, under the patronage of the Iranian empress Farah Pahlavi, the country purchased a gigantic collection of modern and contemporary art for the Tehran museum, including works by Jackson Pollock, Andy Warhol, Wassily Kandinsky, Paul Gauguin and Francis Bacon. At the opening on 18 October 1976, the Empress’s 38th birthday, avant-garde performance artists danced along the museum’s underground spiral walkway. A tiny elite celebrated modernism - in a country where 45 percent of the population was illiterate. After the Islamic Revolution toppled the Shah in 1979 non-Islamic artworks were banned. Artists and intellectuals fled the country. But the art treasures remained, still guarded today by the museum’s former driver. According to Kamran Diba, the architect and founding director of TMoCA, the collection mirrors the complex and fascinating relationship between Iran and the West. In 2016 the collection was supposed to be shown in Berlin’s Gemäldegalerie. Frank-Walter Steinmeier, German Foreign Minister at the time, had championed the planned exhibition and Iran initially agreed to the cultural exchange. The idea was for not only Andy Warhol and Francis Bacon to go on display in Berlin, but also well-known Iranian artists such as the sculptor Parviz Tanavoli. But the Iranian authorities refused to allow the collection acquired by Farah Pahlavi to leave the country, and the cooperation contract between the museums was cancelled. The debate over the planned exhibition in Berlin brought much to the surface in Iran: the mistrust many Iranian artists feel toward the system of the Islamic Republic and their search for their own identity.
_______
DW Documentary gives you knowledge beyond the headlines. Watch high-class documentaries from German broadcasters and international production companies. Meet intriguing people, travel to distant lands, get a look behind the complexities of daily life and build a deeper understanding of current affairs and global events. Subscribe and explore the world around you with DW Documentary.
Subscribe to DW Documentary:
#
For more documentaries visit:
Instagram
Facebook:
DW netiquette policy: 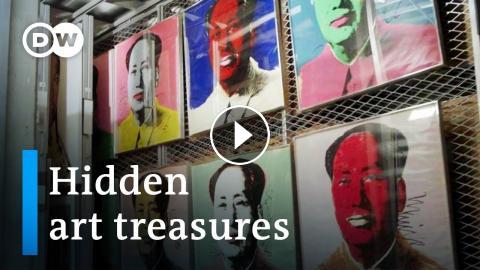 An extensive modern art collection, including works by Warhol, Pollock and Kandinsky, was put together by Iranian ex-Empress Farah Diba in Tehran, Ira...