Brazil election 2018 - who will be president? | DW Documentary (Politics documentary)

ava
Brazil election, 2018. Jair Bolsonaro has won the first round but will face Fernando Haddad in the second round after failing to win a majority.
Brazil went go the polls on October 7 to choose a new president and National Congress. The first-round of the presidential vote has resulted in a second-round run-off between the far-right populist candidate, Jair Bolsonaro, and Fernando Haddad, who recently stepped into the race as the candidate of the leftist Workers’ Party to replace jailed ex-president Luiz Inácio Lula da Silva. Bolsonaro, a former military officer, is leading in the polls. He's vowed to crack down on crime, and cut unemployment. His comments defending the country's former military dictatorship and public remarks criticized by progressive Brazilians as misogynist, racist, and homophobic have earned him the nickname the "Tropical Trump." His supporters include citizens concerned about rampant crime and stagnant economic growth. Bolsonaro is also popular with industrialists and agribusiness leaders who wield enormous influence the country. Some voices are calling this the most important election in Brazil’s history. Will the country turn right, or stay on the left? Lula da Silva is barred from running in this election, but he still enjoys widespread popular support. His endorsement of Haddad could tip the balance. Women voters could play a key role. Brazil today is a deeply divided country. For this report, ARD South America correspondent Matthias Ebert talked to people who are simply struggling to survive. Some are angry; others are desperate. Right now, optimism in Brazil is a scarce commodity.
_______
DW Documentary gives you knowledge beyond the headlines. Watch high-class documentaries from German broadcasters and international production companies. Meet intriguing people, travel to distant lands, get a look behind the complexities of daily life and build a deeper understanding of current affairs and global events. Subscribe and explore the world around you with DW Documentary.
Subscribe to DW Documentary:
#
For more documentaries visit:
Instagram
Facebook:
DW netiquette policy:

Brazil election 2018 - who will be president? | DW Documentary (Politics documentary) 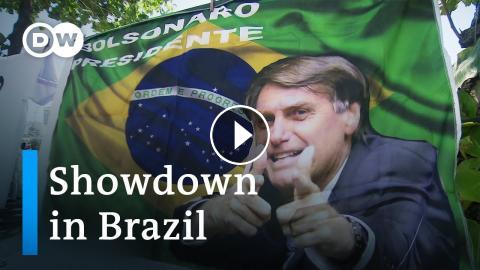 Brazil election, 2018. Jair Bolsonaro has won the first round but will face Fernando Haddad in the second round after failing to win a majority. Brazi...